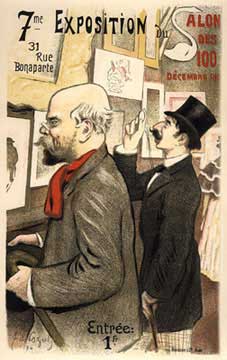 8081
The "Salon des Cent" ("Salon of the 100") was the exhibition hall and marketing outlet of the artistic and literary magazine La Plume, opened in February, 1894, on is own premises at Rue Bonaparte. The editor, Leon Descamps, was one of the first art connoisseurs to champion posters: he often reproduced them in the magazine, organized special exhibitions of them and made them available to the public by reprinting them--with or without the advertising text--in various editions.
Artists whose works were on sale at the Salon were, of course, frequently written-up in the magazine, and nearly all of them were asked, at one time or another, to design a poster for one of the Salon's exhibitions. There were about forty-three exhibits in the brief period of the Salon's existence (1894-1900), with forty artists creating posters for them.
[Reference: PAI -XLI]
"Shown examining pictures on the wall, (one of which is Jossot's design for another Salon des Cent poster for an exhibition earlier that same year), are symbolist poet Paul Verlaine in black hat and coat and [poet] Jean Moreas, founder of Ecole Romane"(PAI -XXI, 120)