View Artist Biography
Back
Prev Next 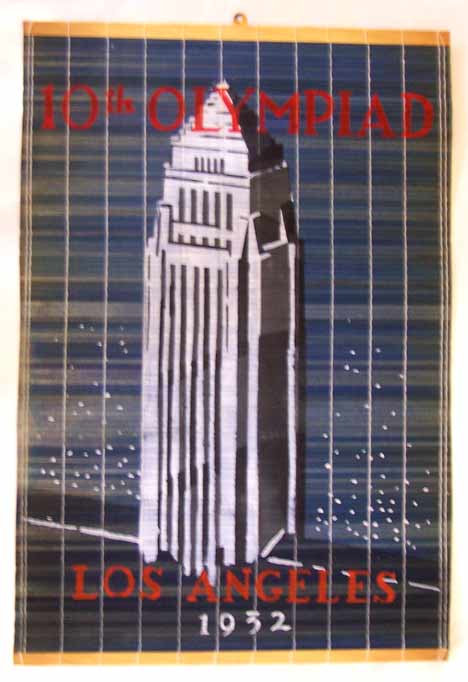 10362
Rare Original . 10th Olympiad Los Angles 1932. Excellent, Printed on wooden rolled mat. A night image of a skyscraper with stars around it, set on a dark blue grey background. The building itself is of art deco design, and colored black and white. (Inventory # 10362)
The second bamboo wall scroll is of a shadow outline of the liberty bell, on a bright pink background. The bell has a white haze around it, as well as an olive branch, the Olympic rings, and a USA flag outdoor banner. (Inventory # 10363)

This small special poster was offered at auction recently (2009) at a minimum value of 500 Euros to 1000 Euros.
The Olympic Logo was designed in 1913 by Pierre de Coubertin, founder of the modern Olympic Games. The five rings symbolize the continents united through sportsmanship and friendly, fair competition.

The building depicted on this poster is Los Angeles City Hall, for many years the tallest builing in the city, until mandated height restrictions were lifted to allow the development of L.A.'s contemporary skyline.

Antique posters are 'pictures of persuasion,' as we might call them, offer a wealth of art, history, design, and popular culture for us to understand. The poster is a familiar part of our world, and we intuitively understand its role as propaganda, promotion, announcement, or advertisement."