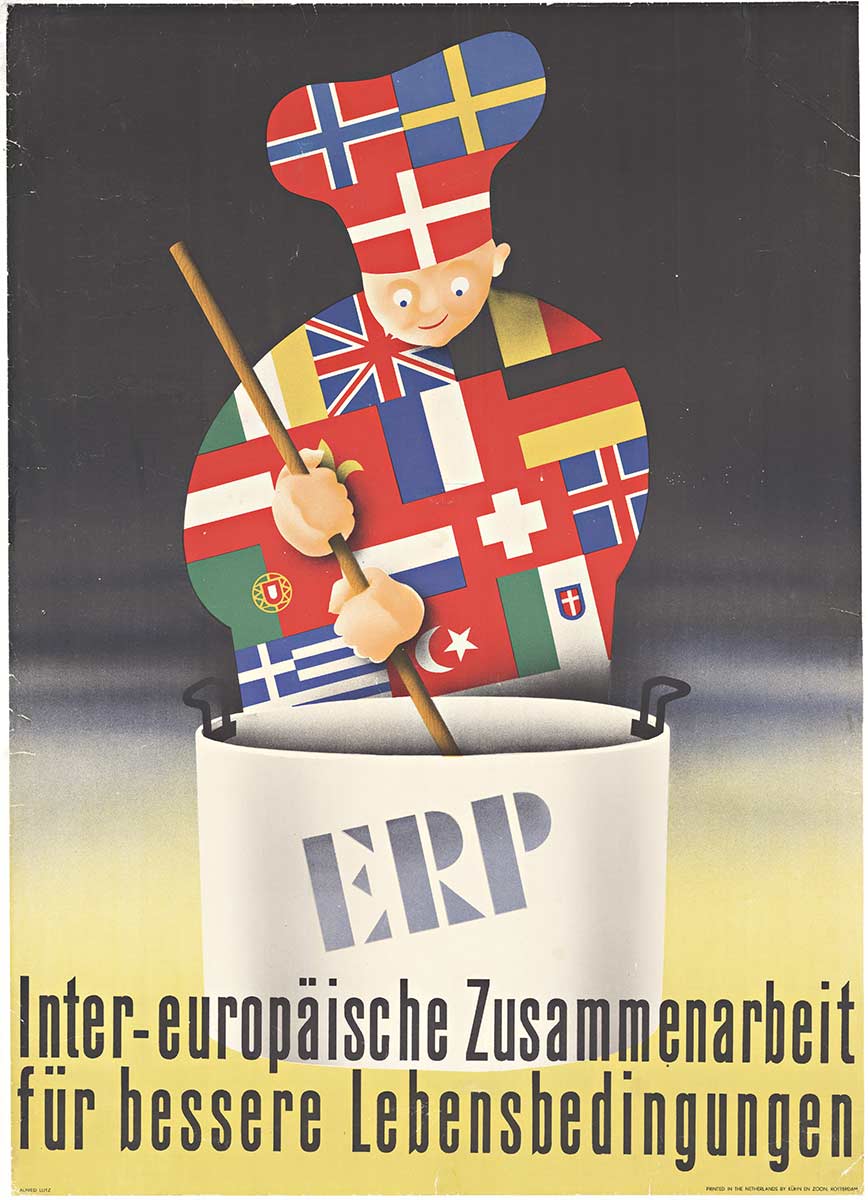 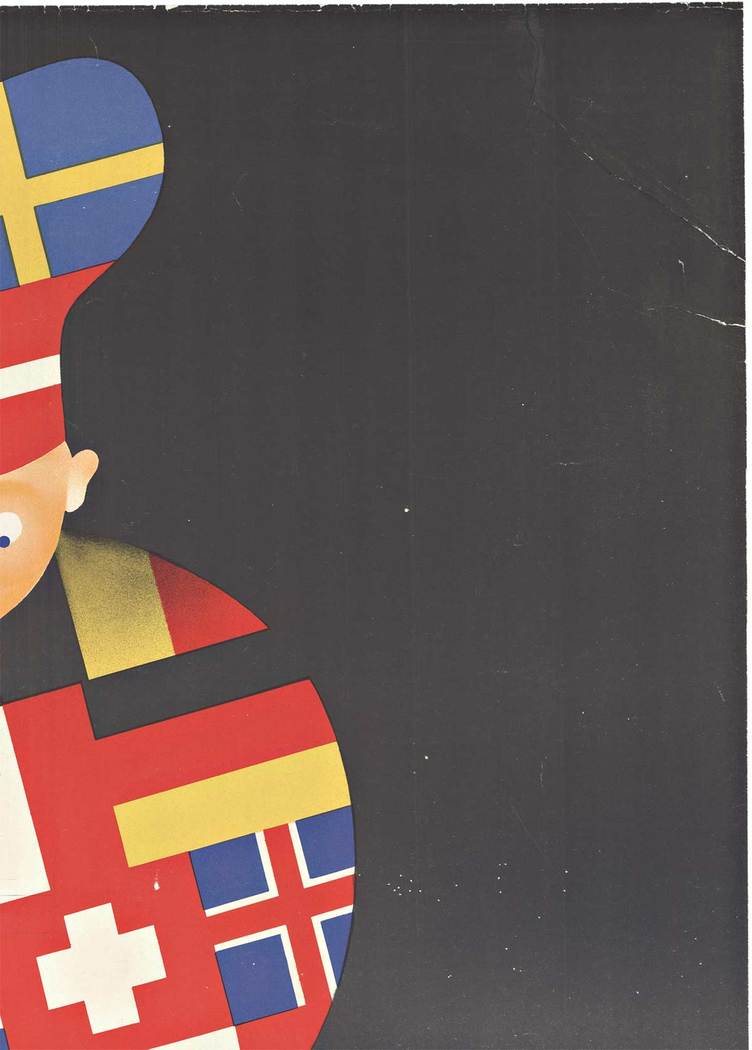 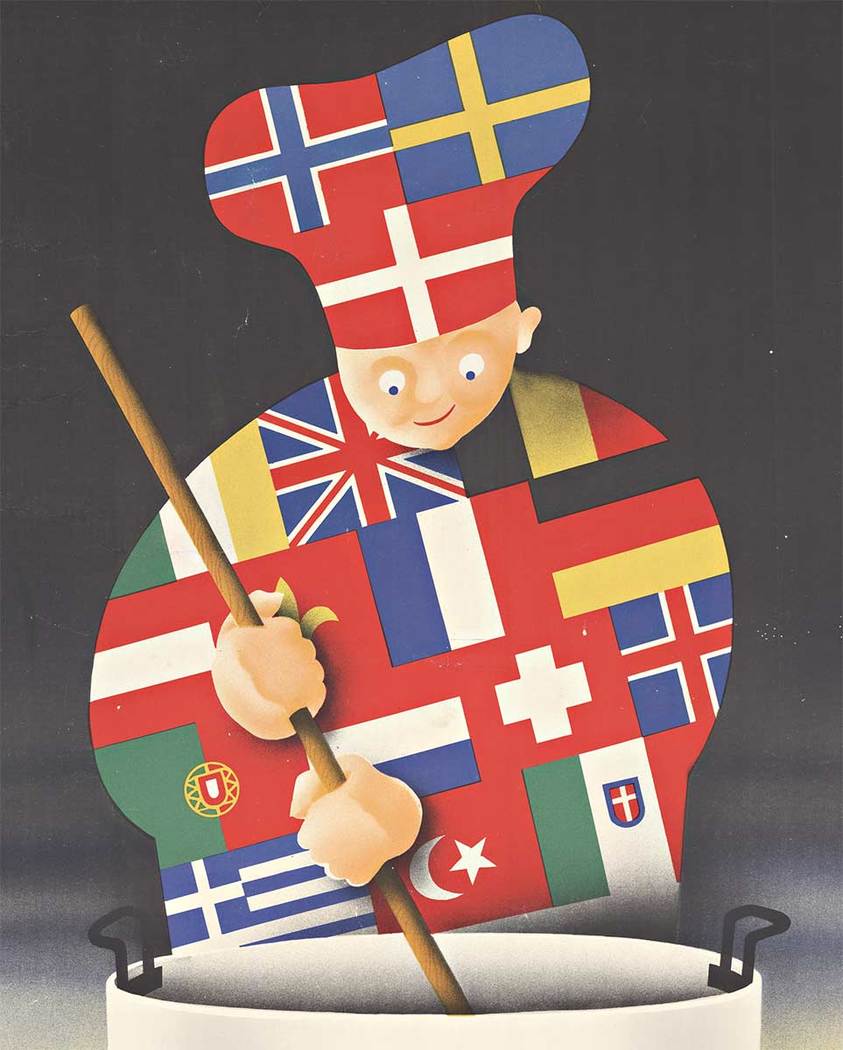 Written on the poster is "Inter-ieuropäische Zusammenarbeit für bessere Lebensbedingungen", which translates to, "Inter-European collaboration for better general living conditions". “The European Recovery Program (ERP), later known as the Marshall Plan, was a US-sponsored program designed to rehabilitate European economies after World War II. Companies in Germany that received ERP funding were obligated to repay the German government, which then re-lent this money to other companies. This process continues today through the government-owned KfW bank, which funds several programs — the “ERP Programs” — from ERP Special Assets.” – Invest-in-Germany.com

The ERP “was a generous proposal to help the Europeans get back on their feet by providing them with some wherewithal to boost their recovery. A condition of this financial aid was that the European governments must themselves take the first steps towards economic collaboration. The offer was made to all the war-affected countries, including the Soviet Union and its satellites, although it was fairly clear at the time that with Europe already divided by Churchill's Iron Curtain (a term he coined in a speech he delivered in Fulton, Missouri in 1946), the Soviet bloc was unlikely to participate. Sure enough, it declined, claiming that its sovereignty would be endangered by accepting U.S. help. As a result, the Marshall Plan became strongly identified with American anti-communist foreign policy (supporting the "free world" as a buffer to the spread of communism), and this aspect went down well with Marshall Plan skeptics in the U.S.” –Germany.info

On this poster is a chef with a jacket made up of each nation’s flag that joined the ERP. Literally the chef is making a “melting pot” of all the nations that joined.

We are glad to assist you. Our current inventory is online and is updated frequently. To purchase, simply add the item(s) to your cart and check out. They will be delivered to your door. Your satisfaction is guaranteed!